Uleyli- The Princess & Pirate is a work of historical fiction based on the true story of Florida’s Pocahontas. It takes place in Tampa Bay, Florida in the year 1528. The story originates from the journals documenting the expedition of conquistador Hernando De Soto. You may be wondering what parts of the story are true and what parts are fictional. Let’s take a look.

Many of the character names are derived directly from the Spanish journals. For instance, Chief Ucita was recorded by several of the Spanish chroniclers. They recorded that the village, Ucita, was named after its chief. They each used different spellings including: Oçita, Eçita, & Ucita.  (Curiously, the Wikipedia article records his name as Uzita and I’m not sure from where this spelling comes.) Based on these different spellings, it’s likely the name was pronounced /oo-SEE-tuh/ which would account for the various phonetic spellings of this Native American name.

“Ulele” first appeared in the 1859 book Live Travels and Adventures of Ferdinand de Soto, Discoverer of the Mississippi by Lambert Wilmer. Worth said the author probably created a name of the previously unnamed woman as a storytelling device. 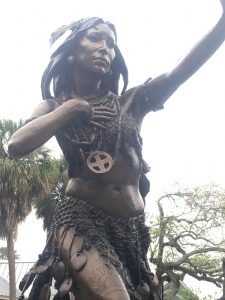 The name, Ulele, is still used around Tampa Bay to this day. Even a restaurant bares this name and pronounces the name as /you-LAY-lee/. I celebrated the completion of my book’s illustrations by taking my daughter to lunch there. It was a very nice place. It includes a very nice statue of Ulele outside. I thought the current spelling was somewhat confusing so I changed the spelling to Uleyli to facilitate pronunciation.

Juan Ortiz told that he was rescued from the grill (barbacoa) by the chief’s wife and three daughters. He never mentioned a name for any of these women so I also never named Uleyli’s mother or two sisters.

In the book, I name three childhood friends of Uleyli. These characters are my own inventions for storytelling purposes. Their names are actually Native American words from the Timucuan language that was spoken in Florida during this time period. Although scholars are nearly certain that Uleyli’s tribe spoke an entirely unrelated language, it was the only native language in Florida for which we have a word list recorded by the Spanish. The names of Uleyli’s three friends are Ibi (“Rain/Rainbow/Water”), Sicuri (“Crane/Goose/Swan”) and Caya (“Partridge/Hen/Turkey”). These words were found in the book A Grammar and Dictionary of the Timucua Language by Julian Granberry.