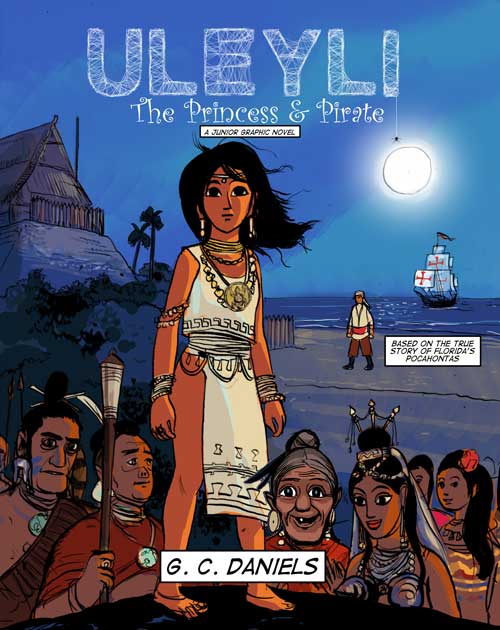 Four hundred and eighty years ago, on May 25, 1539, the Spanish conquistador Hernando de Soto first landed in Florida at Tampa Bay and recorded in his journal the story of a Spaniard saved by a native princess. Now DeLand, Florida author, G.C. Daniels, has brought that story to life in two new illustrated children’s books (a junior graphic novel & a chapter book) entitled Uleyli- The Princess & Pirate: Based on the True Story of Florida’s Pocahontas, both available at all online booksellers.

When Hernando de Soto came ashore he was surprised to discover a young Spanish man by the name of Juan Ortiz who had lived as a captive among the local Florida natives for the past 11 years. Ortiz told a harrowing tale of how he was captured by natives in 1528 while searching for the lost Narvaez expedition, the first Spanish conquistador to explore Florida. Ortiz told how the chief of the local village, Ucita, saw Ortiz’s capture as a chance to get revenge for atrocities committed by the brutal conquistador. (These atrocities included feeding the chief’s mother to the conquistador’s war dogs and slicing off the chief’s nose with his sword.)

Upon securing Ortiz to a barbecue to slowly roast him over a fire, the chief’s plan for revenge was taking shape until his eldest daughter intervened on Ortiz’s behalf. Shaming her father for his brutal treatment of this young captive (Ortiz was only a teenager then) she convinced her father to spare his life.

Sound familiar? Scholars believe that John Smith was inspired by this story when he read the first English translation published in 1609 and fifteen years later wrote his own rescued-by-a-native-princess story.

Florida’s Pocahontas is known as Uleyli. Unlike John Smith’s story of Pocahontas, G.C. Daniels decided to tell the story from the perspective of Uleyli.

“I just thought the story was a lot more interesting when viewed through her eyes,” says Daniels. “Her only experience with Europeans was one of extreme brutality when her grandmother was killed and father maimed. So what would motivate her to save this stranger’s life?”

Daniels did extensive research into both the Spanish accounts of Ortiz’s life among the natives and the historical and archaeological evidence of what native life was like during this time period in order to weave a narrative and create illustrations that try to be as authentic as possible.“These native peoples had dramas and rivalries just like people today,” says Daniels. “Ortiz was thrust into the midst of these conflicting relationships and was saved from death by Uleyli not once but three times. She eventually helped him escape to a rival chief’s village where his life was no longer in danger from her father. The bravery of this young woman to defy her father and risk everything to save this stranger’s life is quite the story. It’s definitely an action-packed story and one I thought held important messages of compassion and non-violence for today’s young readers. I think parents will enjoy it also.”