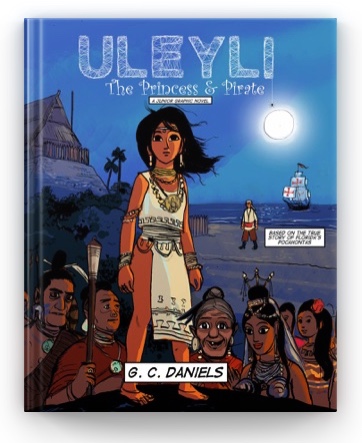 The October 2019 issue of Children’s Bookwatch, a publication of the Midwest Book Review, includes a positive review of Uleyli- The Princess & Pirate (A Junior Graphic Novel): Based on the True Story of Florida’s Pocahontas. The review concludes that the book is “highly recommended” for both “personal and public library children’s graphic novel collections.” Read the full review below and/or online at Children’s Bookwatch.

Uleyli: The Princess and the Pirate is a historical fiction graphic novel based on true events in the life of a Native American princess who lived in Florida, in the year 1528 – the era of first contact between native populations and Spanish explorers. Drawing upon historical record and folklore, the story is from the perspective of Uleyli (based on the real Princess Ulele, also known as “Florida’s Pocahontas”), who saves the life of a Spanish captive. Uleyli feels trapped by an arranged marriage to the ruler of a neighboring tribe, but her own artist talents, sense of compassion, and ability to inspire others just might be the key to taking control of her destiny! Uleyli: The Princess and the Pirate is a welcome addition to personal and public library children’s graphic novel collections, highly recommended. It should be noted that “Uleyli: The Princess and the Pirate” is also available as an illustrated chapter book, and future titles in the series are forthcoming.